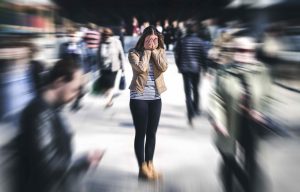 One of the most disconcerting symptoms people might experience when stressed is depersonalisation.

Depersonalisation symptoms are commonly associated with brief panic reactions, but they can become more frequent and longstanding. They can be associated with anxiety, depression, trauma reactions and especially with dissociative disorders, such as Dissociative Identity Disorder.

Depersonalisation is a form of dissociation.

Dissociative symptoms involve a subjective experience of detachment from one’s body, emotions, usual memory functioning and/or connection with the world. This contrasts with a person feeling well connected with themselves and the world around them.

Correspondingly, dissociative experiences are often associated with feelings of a loss of control. They may lead people to question the soundness of their own mind. Dissociative states can be temporary, as is typically the case with panic attacks, but patterns or habits of dissociative behaviours can become more entrenched over time.

Common depersonalisation symptoms include feeling detached from your body, such as feeling as though your body does not belong to you, or viewing yourself from a distance as though viewing another person.

You may experience yourself as being on autopilot, or feel as though you are in a dream. It also includes not relating easily to the image of yourself in the mirror.

Depersonalisation often also involves a sense of emotional numbing or a sense of emotional detachment. It is commonly also associated with disruptions to memory, feeling disconnected from one’s memories or having uncommon difficulty remembering recent or past events. People may feel as though their memories do not truly belong to them. Memories may otherwise seem distorted in their time frame so that recent events feel more distant.

The experience of depersonalisation can be especially disruptive when associated with feelings of derealisation.

Derealisation means having a sense of detachment from your surroundings, and perhaps feeling as though the world is not real. People may feel as though they are looking at the world through a fog. Especially when people are highly distressed, they may misinterpret this experience and fear that they are losing their mind. In such cases, the person’s anxiety and distress about experiencing depersonalisation symptoms can become just as disruptive as the depersonalisation itself.

How Dissociation Presents in Everyday Life

The following quotes from clients may convey something of the subjective experience of depersonalisation and how it can be so unsettling.

A woman in her 30’s described, “Sometimes I have the feeling that I am not real – like I don’t exist. It’s like I don’t know myself. Then it’s like I have an obsessive idea that doesn’t go. It comes back to thinking my loved ones don’t exist – they are not real…”

After increasingly feeling estranged from herself and others she described a “fear of losing connection with reality.”  Notably, this woman was not at all psychotic, was articulate and coherent in her speech and showed a high level of cognitive functioning, being a PhD student. She was objectively managing well with family routines and roles. She recognised that she tended to be a somewhat anxious person, partly influenced by her perfectionism.

Another example involved a senior school student who commonly experienced anxiety in social situations and when she perceived increased demands and expectations at school.

She described her depersonalisation in terms of, “It feels like I’m not actually here – like I’m watching. Like how you feel in a dream. On autopilot. I can’t concentrate on anything in particular. Afterwards, I can’t remember what happened.” She went on to describe that, “Sometimes I feel that I’m not actually in my body. I’m next to, or above or just outside my body. I look in a mirror and know it’s me, but it doesn’t feel like it. It’s like what’s happening isn’t my real life. I do an activity and don’t realise I’m doing it. I don’t remember doing it.”

It is easy to understand how someone having such experiences can be very concerned about the loss of their usual sense of control and may fear that they are losing their mind. Again, this teenage girl was very articulate and coherent and related well to others

How Common is Depersonalisation?

Depersonalisation is relatively common, in that approximately half of all people will experience it in some form at some point in their life.

It may be especially prevalent in panic reactions, where approximately half those experiencing panic attacks will report accompanying symptoms of depersonalisation. It is also more common whilst experiencing a traumatic event.

More persistent experiences of depersonalisation are about twice as common in females than males and occur more frequently between the ages of 15 and 30 years. Depersonalisation likely occurs more often in those who are more prone to experiencing anxiety as well as those who have excessive concerns about feeling in control. This may be evident in perfectionistic tendencies or difficulty accepting vulnerability.

It is relatively rare, affecting approximately 2% of the population. Persistent depersonalisation is a common feature of Dissociative Identity Disorder (DID), a condition in which people experience marked shifts in their sense of identity. Approximately 1% of people are estimated to suffer from DID, more often following a history of repeated childhood trauma.

These conditions can lead people to question their sanity and are sometimes confused with psychosis, even by health professionals, but the vast majority of those with depersonalisation and other dissociative conditions are not psychotic. Apart from the distortions in perspective associated with dissociative episodes, people with these conditions are generally well in touch with reality.

Depersonalisation/derealisation either in combination or separately are recognised as one of the thirteen defining symptoms of a panic attack.

The other panic attack symptoms are heart palpitations, trembling or shaking, shortness of breath, feeling dizzy, numbness or tingling, heat sensations or chills, sweating, feelings of choking, chest pain or discomfort, nausea or abdominal distress, fear of dying and feelings of losing control. Panic attacks are characterised by having at least four of these panic symptoms at one time. People may go on to develop a panic disorder if they have recurrent panic attacks combined with persistent worry about having further attacks and/or they repeatedly avoid situations that they fear may precipitate an attack.

When people experience depersonalisation during a panic attack it may be quite temporary, just like the other symptoms. However, if the person is particularly distressed about the depersonalisation and fear that they are losing control over their mind, they might develop a more persistent sense of being disconnected from their usual self. People’s fear of the depersonalisation and derealisation, especially when it leads them to question their sanity, can intensify and prolong these very feelings.

What Leads to Feelings of Depersonalisation and Derealisation in Panic Attacks?

One contributor to these feelings is hyperventilation or over-breathing, which commonly occurs during panic attacks.

Hyperventilation can interfere with the efficient release of oxygen from the circulating blood to brain cells. The reduced oxygen to the brain can trigger feelings of confusion and unreality as well as the more commonly recognized panic symptoms of faintness, dizziness and increased heart rate.

Another contributing factor is emotional numbing.

Those who experience depersonalisation during panic reactions will typically show a combination of high agitation, heightened vigilance toward their internal reactions and emotional numbing. This numbing likely results in part from increased activity in the parts of the frontal lobes that inhibit emotion. Whereas this might be an understandable, but largely unconscious, attempt to reduce distress, it also can lead to a disconcerting or unwanted feeling of detachment.

In such situations, it is important for the person to learn to deal with the depersonalisation and derealisation in the same way it helps to deal with the other panic symptoms, and especially to learn that these symptoms are not dangerous. They do not mean that you are losing your mind, even though it may feel that way. Whilst panicking, our prefrontal cortex, which is responsible for planful integrated behaviour, will be relatively switched off. This is to prioritise a fight, flight or freeze reaction, our basic survival mechanisms when facing danger.

Also see our practice handout on dealing with panic symptoms.

In the first instance, when experiencing a panic attack it can help to slow one’s breathing, as this helps to counter the effects of hyperventilation.

It helps to ground yourself by focusing on familiar objects in your immediate environment, perhaps describing them to yourself in terms of their appearance, colour or shape.

It helps to remind yourself that it’s not dangerous, perhaps by repeating a mantra to yourself such as “I’ll be OK”, or “Let it pass”.

When depersonalisation is a feature of panic, it helps to manage it as other dissociative symptoms, by aiming to face your discomfort “within your own skin.”

This might initially lead the distress to feel a little more intense or acute, but it enables the agitation to settle over time in a more mindful way. By choosing to reduce one’s avoidance or detachment from the uncomfortable emotional distress, it helps you to deal with the feelings more directly.

When the panic feelings settle it helps to encourage yourself for having got through the experience, noticing how it eventually settled. This gradually helps build confidence, even whilst you are feeling agitated, that the panic symptoms and depersonalisation will eventually settle. This in turn helps reduce anticipatory anxiety or fear about subsequent panic attacks that can unwittingly prime the experience of further panic.

As with other anxiety symptoms, when you bear with the symptoms and recognise what they represent, they can become a helpful indication that you’re becoming distressed about something. It can then alert you to appraise your current circumstances and to identify any obvious sources of stress. You might then be in a better position to consider steps to work around or alleviate the stress.

In summary, depersonalisation experiences are relatively common especially in the context of acute anxiety, such as panic reactions.

They are not dangerous. As with other dissociative symptoms, it helps to aim to manage painful feelings “within your own skin”. Even though this can be quite uncomfortable, especially initially, it helps the feelings of agitation to settle over time. It helps reduce numbing or excessive avoidance of emotional discomfort and of situations that may provoke such discomfort. This typically increases people’s feelings of resilience, confidence and emotional resourcefulness, consistent with the benefits of greater mindfulness.

Click here for podcast on depersonalisation in panic attacks

Click here for article on dealing with dissociative symptoms

Chris Mackey is a clinical psychologist and Fellow of The Australian Psychological Society with 40 years’ psychotherapy experience, including 30 years specialising in psychological trauma. He is author of The Positive Psychology of Synchronicity: Enhance Your Mental Health with the Power of Coincidence (See book website). Chris received the 2019 Australian Allied Health Impact Award for his clinical research and media work.