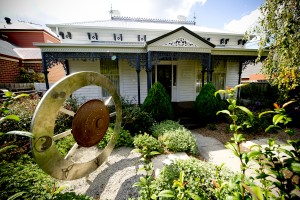 Panic attacks are not such a problem.

That may seem a ridiculous statement when panic reactions can be so exceedingly uncomfortable and disruptive. However, it is commonly not panic symptoms themselves which are the most unsettling aspect of panic attacks. The main problem is panic about the panic. A key goal of dealing with panic attacks is to allow some of the distress to be there. Panic reactions are not dangerous. Panic attacks will pass, usually within a matter of minutes. It may feel as though one is losing ones mind or might have a heart attack, but panic is not dangerous. Panic attacks may be very, very unpleasant, but panic is not dangerous. The goal is to help get this message through to the back of ones mind, even when one is experiencing panic symptoms. That is not easy, and takes practice. Commonly it takes months and months of practice before a person can experience repeated panic reactions and yet feel some confidence that the distressing feelings will soon pass.

Panic attacks represent one of the more common difficulties for which people seek psychological treatment.

Panic attacks involve a sudden bout of anxiety or intense fear in the absence of real danger. They typically reach a peak within a few minutes. Panic attacks involve experiencing a number of characteristic symptoms which may include heart palpitations, sweating, trembling, shortness of breath, feelings of choking, chest pain, nausea, feeling dizzy or lightheaded, chills or hot flushes, feelings of unreality or of feeling detached from oneself, numbness or tingling sensations and fears of losing control of either one’s mind or one’s body. Panic attacks tend to worsen when a person becomes preoccupied about the possibility of further attacks and becomes increasingly sensitive to any physical changes in their body which suggest that such an attack might recur. Again, the key difficulty at that point is not so much the impact of particular panic symptoms themselves, but that people may tend to panic about the panic. This can further interfere with one’s brain functioning by leading to further activation of the limbic system, a part of the brain which is important for mobilising a fight or flight response to escape danger. In addition to the person feeling like fleeing the situation, their frontal lobes may become less active which may lead to them feeling a marked loss of control of their reactions and perhaps losing their more usual sense of self.

It may greatly help if the person can manage to stay in the situation rather than flee, perhaps using anxiety management strategies described below, as that helps one learn that panic symptoms will typically pass in a matter of minutes.

One common anxiety-related condition, panic disorder, is experienced by approximately 1 in 30 people.

This occurs when people have recurrent panic attacks and remain especially fearful that they will experience another such attack. In just under half of such cases, this may also lead to agoraphobia when the person comes to avoid situations in which they are fearful that an attack may recur. People may also have a phobia, or excessive fear of such situations as heights, enclosed spaces or encountering spiders, and may experience panic-like reactions when encountering the prospect of entering the feared situation. People can also experience panic reactions in the context of having a post-traumatic stress disorder. This condition involves marked anxiety when somebody is reminded of a past traumatic event, such as a car accident or other life-threatening situation, about which they have ongoing intrusive and painful recollections which they seek to block out of their mind. Obsessive-compulsive disorder involves exaggerated distressing thoughts about potential threatening situations such as a fear of leaving the gas on at home, not properly locking one’s front door or excessive concerns about contamination from dirt: people may then engage in unnecessary time-consuming activities to neutralise their anxiety feelings such as compulsive hand-washing or compulsively checking door locks which they have already checked. Social anxiety occurs when a person feels somewhat panicky if they are forced to be the centre of attention or fear the consequences of coming under other people’s close scrutiny. People may also experience panic-type reactions associated with performance anxiety before or during an event in which they have high expectations of performing well such as before an exam or a competitive event. When such conditions are especially disruptive, it can be worth seeking psychological assistance which in most circumstances can lead to substantial gains in approximately eight to twelve therapy sessions, depending on the severity and chronicity of the condition. Although most anxiety disorders appear to improve somewhat from approximately 55 years of age, there are fewer remissions without treatment.

Strategies For Dealing with Panic:

Managing well with anxiety-related reactions has a lot to do with one’s mindset.

It has a lot more to do with letting go than controlling one’s reactions. Dealing constructively with anxiety or panic commonly involves allowing some discomfort to be there, bearing with it, grappling with a situation or muddling through it. It is about coping rather than mastery. Coping means allowing oneself to feel the anxiety, but recognizing that one has ways of handling it. Mastery is about trying to be on top of a situation, trying to succeed in controlling it, or aiming to eliminate bad feelings. Aiming to master anxiety reactions often makes the situation worse. There is no need to Be Positive! so to speak. It is more about hanging in there when you feel bad. When disruptive symptoms pass, that then allows you to get on with whatever you were doing. Such an approach helps reinforce the understanding that panic is not dangerous.

Panic symptoms are commonly influenced by disrupted patterns of breathing.

In particular, if people are facing ongoing stresses they will tend to be at greater risk of over-breathing. At rest, people generally need no more than about 14 breaths per minute. If people commonly experience dizziness during panic attacks, it is likely that panic symptoms have been induced by over-breathing. Overbreathing can include rapid breathing or frequent sighing or yawning. This may lead to a complicated range of bodily reactions associated with reduced carbon dioxide in the blood and reduced oxygen to the brain. Many panic symptoms can be directly caused by over-breathing. In a psychological therapy session, a client who has had panic attacks may be encouraged to hyperventilate for a minute or so to demonstrate the extent to which panic symptoms can be caused just by changing breathing patterns alone. To help counter over-breathing, it can help to take in 10 to 12 breaths per minute (one breath every five or six seconds), preferably breathing relatively lightly through the nose, and breathing more from the diaphragm (as though breathing through the belly button) than from the chest. Practising an exercise of slowing breathing for a few minutes each day (perhaps counting each breath in and saying, Relax, for each breath out) can help prepare oneself to slow one’s breathing when experiencing panic symptoms. This exercise might best be repeated daily for several weeks.

It can be particularly helpful to draw on coping self-statements to help manage with anxiety.

This helps further activate frontal lobe influence on more primitive brain functioning (geared toward escaping danger) which may, in turn, allow the person to gain greater feelings of partial control. Coping self-statements may be in the form of a mantra, or a word or phrase that a person may repeat to themselves, such as, &quot;Let it pass&quot;, Breathe, Ill be OK, or Let it be. People can simultaneously use relaxation or breathing techniques to reduce tension.

Sometimes it may be helpful to combine psychological strategies incorporating the cognitive-behavioural techniques described above with medication as an adjunct, but often in the first instance, it is helpful to address panic reactions without using medication.

People may be at increased chance of relapse if they have used medication and then the medication is discontinued. In many cases medication is not necessary. Medication may sometimes be a useful aid to treatment as it can provide some symptom relief whilst the person further applies psychological strategies, but medication is not a complete treatment in itself.

Practising Experiencing Discomfort as a Goal

When people are aiming to further develop their ways of dealing with anxiety and panic it can help to seek to practise experiencing discomfort as a goal rather than as a problem to be overcome.

When people gain much greater confidence that they are able to manage with discomfort, then they are much less likely to experience fear about the fear and are less likely to panic in the face of panic. This can help reverse a vicious cycle and may increase the person’s confidence that they can deal with whatever situations they may face. This may involve muddling through or grappling with those situations and coming out the other side, perhaps uncomfortable, but relatively unscathed.

Exposing Oneself to Challenging Situations

When dealing with any persistent difficulty related to anxiety it can aid recovery for the person to deliberately enter various challenging situations (a therapy strategy called exposure), perhaps whilst using the aforementioned strategies.

The person may then gain confidence or increase their sense of self-efficacy or effectiveness in dealing with such situations, which in turn leads those situations to seem less threatening. People might best vary their exposure to challenging situations, such as by entering different types of situations for varying lengths of time. If a person feels they must leave a situation, it is best to engage in a strategic retreat. This involves briefly withdrawing from a situation, preferably moving slowly rather than rushing, to a point of having regained some further composure, and then re-entering the original situation. It can sometimes help a person to focus their attention on their planned actions or behaviour as opposed to their feelings in a particular situation. By having the focus outside of oneself, at least temporarily, this may help to distract oneself from internal uncomfortable feelings.

In summary, a key goal for managing with panic is to aim to tolerate anxiety rather than to try to control it or necessarily reduce it.

This involves allowing some fear to remain. The aforementioned strategies, especially including the use of a brief coping mantra, are best practised for a period of six months or so to help them become habitual and automatic.

For a demonstration on a useful therapy technique to combat panic, watch this video from Chris Mackey.

How to Worry Less

What is Anxiety and How Can it be Treated? (video)

Effectiveness of Psychological Therapy for Anxiety and Depression