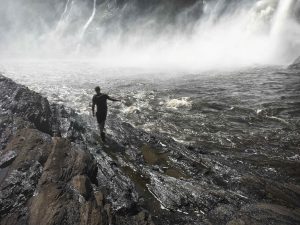 Chris Mackey is a clinical psychologist with over 40 years clinical experience across public psychiatric hospital and private practice settings. He is author of the book, The Positive Psychology of Synchronicity: Enhance your mental health with the power of coincidence. One of his key roles in 10 years as a senior clinical psychologist in psychiatric hospitals was to help differentiate psychosis from other mental health conditions, including complex trauma reactions. Whereas he was initially very skeptical that any coincidences occurred beyond random chance, his own experience and clients’ stories have convinced him that some coincidences are so striking, so frequent or so meaningful that they cannot be explained away by chance alone.

Many people feel overwhelmed if they start to experience a huge increase of weird coincidences. This may be especially unsettling if people haven’t experienced such frequent or striking coincidences before. It can be hard to make to make any sense of them.

In such situations people may fear that they are going mad. Otherwise, they might believe that their experiences are genuine and meaningful, but family members or friends might think they are becoming mentally ill. For example, If the person is especially excited or energized by such experiences, it can seem to others that they are suffering from a bipolar disorder.

This raises the question of how you can tell the difference between non-ordinary states of consciousness, which overlap with recognised spiritual or mystical phenomena, and psychosis. This is a complex question as it can be difficult even for mental health professionals to tell the difference. Some people might even be experiencing a combination of both. It can be even more complicated when people have also experienced significant trauma reactions including dissociative symptoms, which may also have overlapping features with psychosis, including hearing voices.

However, it’s at least worth making the attempt to differentiate transpersonal experience from psychosis. Those who are experiencing such phenomena and are pushed toward psychiatric hospitalisation tend to respond poorly, especially if they are mainly treated according to a rigid medical model focussing on medication. They might not only feel unnecessarily invalidated, but their mental health may deteriorate. On the other hand, people who are suffering from significant mental illness may often experience loosened associations, which means that they are more likely to read extra significance into trivial or random events and to develop distorted ideas about themselves in relation to the world.

Before considering this diagnostic problem further, I’ll clarify that I am using the terms spiritual, transpersonal and mystical as overlapping descriptions of experience that has a numinous, or sacred, quality. William James, an influential American pioneer of psychology and author of The Varieties of Religious Experience, defined mystical experience as being extraordinary experience with four key features. It is ineffable: that is, it’s impossible to describe the experience adequately in words. It is noetic, in that it conveys seemingly significant insight beyond what can be gained by the intellect. It is transient, being unsustainable for a long period. And it shows passivity: a sense of being influenced by something beyond our own will.

Striking and meaningful coincidences, also known as synchronicity, are one example of an experience that is recognized by many people and cultures as a potentially genuine spiritual or mystical phenomenon. Other transpersonal or mystical experiences may include hearing the voice of a deceased relative, déjà vu or near-death experiences. They can include suddenly developing psychic or other paranormal abilities such as clairvoyant visions of past or future events or telepathy. These experiences may arise in such a way that is overwhelming for an individual and they may fear that they are losing their mind. This is more likely if people have not discussed such experiences with others and don’t have any mental framework for thinking about them.

The issue of helping to differentiate between transpersonal experience and psychosis relates to the theme of “spiritual emergency”, a little discussed topic in mental-health circles. A spiritual emergency occurs if a person experiences what might be recognized as mystical or transpersonal phenomena at a time of crisis. The crisis might be related in part to various challenges the person is facing in their everyday life, or it can even be precipitated by the unsettling emergence of spiritual phenomena themselves.

Especially in the latter case, it helps for the person to understand that almost all cultures of the world recognize in some way the potential importance and benefit of mystical experiences. Most early cultures had traditional healers, or shamans, who were respected for their capacity to experience mystical phenomena. All religions include belief in such phenomena.

Even though mental health services in most developed countries might dismiss belief in mystical phenomena as superstitious, some of the most influential psychologists and psychiatrists have openly held such beliefs, including William James, Abraham Maslow and Carl Jung. Jung’s Memories, Dreams, Reflections has a particularly rich record of his own and others’ transpersonal experiences, many of which had a powerful transformative impact. We might say that they believed in mind, body and soul, whereas mental health services rarely go beyond considering the mind and body. This is gradually changing and one of the most noticeable shifts in recent times in the mental health field is a greater recognition of a spiritual dimension in life, even for those people who are not religious.

One way of thinking about a sudden increase in transpersonal or mystical experience, including a flood of synchronicity, is to consider the psycho-spiritual model of the American philosopher, Ken Wilber, which I read about in John Rowan’s book, The Transpersonal: Spirituality in Psychotherapy and Counselling (Ch. 3). Wilber described that as we mature, our personality will develop through certain stages where we are mainly concerned about how we relate to the material world. You might say that we are focused on our ego. However, a number of people reach a point where they start to tap into a larger consciousness, and reach “trans-egoic” states of mind. When this starts to happen people might suddenly become aware of having mystical experiences, perhaps including frequent synchronicity or emerging psychic abilities described earlier. Many cultures have recognized terms for such mystical experiences, including “satori”.

There are two main traps that people might fall into at this time. One is to become so concerned about the weirdness of these experiences that the person retreats from them, dismissing them, or pretending that they don’t exist. However, this can blunt one’s ongoing spiritual development toward more enlightened states of being.

On the other hand, the person might mistakenly believe that they have started to develop some utterly unique abilities and that they are therefore very special. This might lead to “psychic inflation” or a form of grandiosity. This is not good for people’s mental health, especially if it is much exaggerated or long lasting. Rather than helping people tap into a wider consciousness, which would usually help people’s empathy and connection with others, it can disrupt people’s relationships with others. It could also lead to a greater risk of psychosis.

So, how might we differentiate meaningful spiritual experience, or legitimate but non-ordinary states of consciousness, from psychosis? It helps to consider some literature on this subject, including the writings of Stanislav and Christina Grof. It can also be helpful to consider some questions posed by David Lukoff, a clinical psychologist and transpersonal therapist, described in the book, The Transpersonal: Spirituality in Psychotherapy and Counselling (pp. 255-6). Lukoff experienced a spiritual crisis of his own in his early 20s, which overlapped with psychotic symptoms. If a person experiencing a spiritual crisis was to see a health professional to better understand their state of mind, hopefully the therapist would be familiar with such literature and would be in a better position to consider Lukoff’s following questions.

Firstly, does the person suffer from a mental health problem consistent with a recognized psychiatric classification, such as a psychotic condition? Secondly, do their reactions involve mystical or transpersonal experience, even if in the context of a crisis? Thirdly, is a positive outcome likely? And finally, is there a likelihood of harm to the person or others?

I would suggest some additional questions in relation to synchronicity, that might be relevant to gauging the likelihood of a positive outcome or harm. Is the person acting in ways consistent with their longer held personal beliefs or philosophy?  Can the person describe a rationale for the ways they are acting on synchronicity? If the person has acted in a way to use synchronicity as a guide, is there any evidence of their resulting actions having positive outcomes as opposed to negative outcomes. Is the person otherwise showing signs of stability, such as currently being able to manage with everyday life demands?

I have personal experience of a time when I could confidently answer yes to all of these additional questions, and yet a small number of friends genuinely believed that I was suffering from psychosis and needed medication. I wrote about this experience in Chapters 13 to 15 of my book,  The Positive Psychology of Synchronicity. It seemed no accident that unlike my other friends and colleagues who did not share that opinion, they had all had more exposure to medical training. Even when things turned out well for me without requiring any mental health intervention, my friends did not seem to notice that their predictions about my mental health were false and that maybe they had missed something.

That experience has certainly added to my personal interest in encouraging mental health practitioners to become more accepting of a spiritual, or soul, dimension in life. I believe that we’ll then hopefully gradually become better at weighing up the degree to which people’s reactions might best be understood as transpersonal experience as opposed to significant mental health problems. It can also be helpful and reassuring if a person has found one or more “spiritual friends”, or people who already know of your deeper personal beliefs about a soul dimension in life, and who know of some of the more unusual or mystical experiences you have had whilst functioning normally.

No doubt there will be times when it remains very difficult to tell the difference between psychosis and satori, or potentially genuine and meaningful mystical experience. Even then, if such questions are actively considered, it is likely to help those suffering from any crisis to feel more deeply heard and understood.

In conclusion, these issues deserve much more consideration in mental health settings than currently given. After all, they have been recognized for a very long time. In Phaedrus, which Plato wrote about 2500 years ago, the Greek philosopher referred to “prophesy” as a form of “divine madness”. He contrasted this with common madness, or mania. It’s striking that even Plato identified that a synchronistic experience that involves precognition might be best understood as having a spiritual quality rather than representing psychosis. Many current health professionals believe that there are a range of mystical experiences that are prone to be similarly confused.

Click here for podcast on separating psycho-spiritual experience from psychosis.