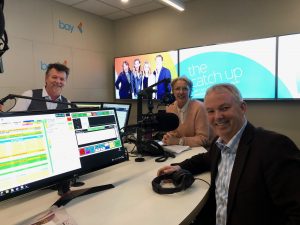 This is the full list of “Talking Synchronicity” recordings from 2019 when Chris again joined Daryl Reader and Roxie Bennett on 93.9 Bay FM Geelong every alternate Wednesday at 5:40 pm.

Callers described their synchronicity stories in a way that might help us appreciate the value of meaningful coincidences in our lives.

On 18th December, Michelle describes the synchronicity she experienced in encountering Destination Happiness, Chris’s book on synchronicity and a character strengths questionnaire. This led to many benefits for Michelle and others.

On 4th December, Chris described some synchronistic experiences related to visiting a psychologist friend in Argentina, Mirta Dall’Occhio, who runs the Sincronia Institute in Buenos Aires.

On 6th November, Suzanne describes how a psychic helped her feel connected with her deceased father by passing on some uncannily meaningful messages.

On 25th September, Yogi describes her encounter with James Pawelski, a leader of the positive psychology field in a U.S. customs queue. This was all the more striking as Chris had mentioned Yogi’s capacity for making uncanny connections with people in the recent 14th August segment.

On 11th September, Chris describes some striking synchronicity around his recent book launch tour to London including the date of the launch at Watkins book store, a trident symbol, the Hindu God Shiva (who is associated with a trident) and a flavoursome English ale called The Optimistic Monk.

On 14th August, Aidan describes an encounter with a fellow traveller in a U.S. hostel that was anticipated by a friend, but way against the odds.

On 31st July, Neil tells a truly amazing story about his encounter with a “psychic monk”. It’s an extended story, but it’s certainly worth waiting for the punchline at the end.

On 17th July, Chris’s friend, Ross, tells two intriguing stories, including the first in which his life is saved by an “intimation” to move across to the other side of the road when he was sleeping rough. Ross then described a delightful story of the universe providing in a remarkably uncanny way, in this case helping manifest a new oven within minutes of learning he needed one.

On 3rd July, Michael rang with the story of how his Dad had a remarkable near miss when he re-booked a plane flight and avoided a calamity. Jeremy rang with an affirming example of a fortuitous email arriving at 11:11, supporting the philosophy of serving others.

On 19th June, Melissa rang with an intriguing story about a clock stopping when her stepfather died and starting again on the anniversary of his death. Another caller, Jane, described the mysterious circumstances around a phantom pregnancy.

In the segment below from 5th June, Ian describes his uncannily frequent experience of someone calling him at the very instant he is about to ring them. This can helpfully add to a sense of connection with others.

The segment below from 22nd May includes several callers including Kylie, whose father showed an uncanny knack for premonitions, including predicting the name she would give her baby.

The segment below from 8th May includes a call  from Chris’s friend, Sarah, who describes the synchronicity involved in meeting her husband. Sarah’s example relates to setting an intention and the so-called “law of attraction”.

The segment below from 10th April describes the phenomenon of synchronicity and details of the new edition of Chris’s book, The Positive Psychology of Synchronicity, coming out in August this year.