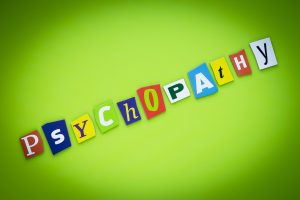 What is a psychopath?

We might typically think of a serial killer, or at least someone with a criminal record.

However, psychopaths can be found in many walks of life, representing about 1% of the population. Approximately 10% of people have significant psychopathic traits. They might be more prevalent in leadership positions or other situations where people have an uncommonly strong drive for power, status or money.

A core feature of psychopathy is an excessive focus on pursuing one’s own interests relative to acknowledging the interests of others. This imbalance, combined with a lack of empathy for others, generally leads to disrupted relationships, at least in the long run. Psychopathy shares these features with narcissism, but adds a darker edge.

Psychopathy is a relevant issue for many people who seek psychological therapy.

However, this is less commonly from the psychopath seeking such therapy themselves as most psychopaths have little insight into their failings and don’t think there is anything wrong with them. However, a number of clients present as a result of distress or harm stemming from their involvement with a psychopath, who might be their partner, their boss or a colleague.

It can be very difficult to identify a psychopath, especially at first.

They tend to be charming and engaging to those whom they wish to gain some benefit from. They are often deceitful and can be extraordinarily capable of lying in a convincing way. When people find that they have been manipulated or exploited they may feel foolish for having been taken in, especially if in retrospect they recognise that the exploitative person had initially seemed too good to be true. However, owing to the psychopaths typically good first impression and capacity to deceive, it’s harsh to blame oneself for having been too trusting. Many people will be caught out by a psychopath if they become a target of their interest.

Most people are very relieved when they are able to move on from their relationship with the psychopath.

In the meantime, it is worth protecting yourself and making yourself a smaller target from their harmful behaviour. To help people counter the negative impact of psychopathic behaviour it is important to be able to recognise the core psychopathic traits. It especially helps to know these typical characteristics because, when interacting with the psychopath, many people will doubt themselves. This self-doubt can be increased by the distress they are feeling, perhaps combined with low self-esteem as a result of feeling abused. Recognising psychopathic behaviours helps to appreciate how it is the psychopath who it is most responsible for the harmful behaviour rather than anyone else, yourself included.

What are the core psychopathic traits?

The core psychopathic traits are spelt out very well by Paul Babiak and Robert Hare in their illuminating book, Snakes in Suits: Understanding and surviving the psychopaths in your office.

Robert Hare also developed the Hare Psychopathy Checklist which outlines the characteristics of psychopaths in four different areas, interpersonally, emotionally, in their lifestyle and in their antisocial behaviour.

However, they partly make a good initial impression as a result of their careful effort to win others over whilst trying to figure out how they can use them for their own purposes. They are quick to identify people’s triggers, including their insecurities, which they can then use to manipulate them. Psychopaths may exaggerate their achievements to a potential employer, their assets to a potential partner, or their past life challenges to a sympathetic colleague. They do this to gain respect, trust or favour.

In order to manipulate different people in the specific ways that influence them there might be inconsistencies in how they present to one person compared with another. This is one of the ways they can be caught out. It is the people they want the least from, whom they are least trying to manipulate, that tend to be the most able to see through them and their deceptions. Psychopaths tend to be selfish and controlling in their relationships.

In leadership positions, psychopaths may appear persuasive and self-confident.

However, their charm tends to be somewhat superficial. Psychopaths often display a grandiose sense of their self-worth. It is often over time that their pattern of deceiving or manipulating others will become more evident. At that point others maybe feel as though they have been used as a pawn.

Psychopaths have a lack of empathy and typically relate to others in a shallow way.

They can be callous and disregard other people’s rights and interests. They will typically fail to accept responsibility for mistakes or things they have done wrong and will show little remorse or guilt for the harm they may have caused. They often try to put the blame onto others, potentially leading their partners or colleagues to doubt themselves, or otherwise to go along with blaming someone else whom the psychopath has convinced them was at fault, perhaps through their convincing lies.

Psychopaths tend to have a high need for stimulation and maybe somewhat thrill-seeking. They tend to be impulsive and irresponsible. They usually aim to achieve their goals in the easiest way or shortest time possible. They are more likely to be caught out in situations that require longer-term planning followed by disciplined effort. They can be skilful at seeking out and winning over patrons who can help them gain short cuts in achieving their goals without having to make such longer-term effort. As corporate leaders, there is often a discrepancy between their presentation and performance. They are often charismatic, but poor at teamwork and bringing people together for a common goal, especially if it is challenging.

Psychopaths antisocial behaviour is often reflected in deceit and unnecessary aggression towards others.

However, they are much more likely than others to engage in criminal behaviour if that is the main way they can think of to get what they want. Psychopaths have often shown early behavioural problems including ongoing difficulties managing with anger. They are often vindictive in their dealings with others.

How to spot a psychopath

Rather than specifically identifying someone as a psychopath, it might be more helpful to simply recognise the number and seriousness of the psychopathic traits that they display.

This can serve as a warning to have as little to do with that person as possible. It can at least prompt you to make yourself a smaller target, or to watch out for and curb the person’s manipulative and harmful behaviour sooner rather than later.

Those with strong psychopathic traits are often surrounded by interpersonal conflict, even though it might not be immediately clear who is causing that conflict. Others might be scapegoated as a result of the psychopath’s deceitful manipulation and lies. Increasingly, the situations they influence are likely to become more chaotic. Increased workplace conflict and increased chaos are clues to alert you that a psychopath might be in your midst. Another indicator might be marked inconsistencies in how others see them.

If people suspect that someone is displaying psychopathic behaviours, it can be helpful to discuss concerns with others, to help pick up inconsistencies and to better see through deceptions and lies.

It can be risky to confront a psychopath if you catch them out, especially if they have some power or influence over you. In a work setting, it will often take the involvement of a number of people, including those in higher authority, to help counter psychopathic behaviour. A fuller solution might include removing them from a position they hold.

If you find yourself in a relationship with a psychopath, it might be best to plan a way of leaving whilst enlisting the support of others and minimising the risk to yourself in how and when you leave. If psychopaths have no further use for you, they will tend to abandon you. If you find yourself in this situation, it may be worth at least being grateful that the person is no longer in your life.

As Babiak and Hare describe, psychopaths are more identifiable as a result of a number of things they are relatively unable to do, at least consistently over time.

They have difficulty collaborating with others, so are relatively unable to share or to form effective teams. They are unable to be modest, to consistently tell the truth, to accept blame, to react calmly or to act without aggression.

If you have psychopathic traits yourself

If you recognise a number of these characteristics in yourself, then you are likely showing much greater insight than the usual psychopath.

In fact, you are less likely to be a psychopath at all, but you might have a number of associated traits. In that case, these characteristics or patterns of behaviour will likely have seriously disrupted many of your relationships and perhaps left you at times feeling very lonely or empty.

All of us face a challenge in life of learning how we might gain much of what we want whilst also being able to get along with others and allowing them to do the same. We shall only likely find a balance by being genuinely attentive to other people’s interests as well as our own, being prepared to actively listen to others and to act collaboratively. It’s important to sometimes be prepared to put others first, such as in parenting roles.

It’s especially important to let go of a sense of entitlement in one’s relationship with others.

The most fundamental principle in positive psychology, a science of wellbeing, is that “other people matter”. Even for our own enlightened self-interest, we might as well remember that “what goes around comes around”. In other words, acting with goodwill or ill will toward others will tend to be mirrored back to us in the long run.

People with psychopathic traits can make significant progress in psychological therapy if they realise that they genuinely want to feel better connected to others. This can go a long way to reducing feelings of emptiness or loneliness. It is important to discontinue more obvious harmful or exploitive behaviour toward others.

It greatly helps to accept one’s vulnerability and to sit with a degree of emotional pain rather than distracting from it.

Many people with psychopathic traits have been treated abusively by caregivers in their childhood. This can cause long term harm to one’s capacity to trust and to form healthy attachments with others. Acting kindly towards others, including in small ways, is a practical way to develop empathy. Learning to be more consistent in being kind is a key way to experiencing more lasting and meaningful connections with others.

To explore these themes further, you can listen to our Psych Spiels and Silver Linings episode, The Snakiness of Psychopaths on the player below.

For other mental health articles and resources on e.g., anxiety, depression and trauma reactions, see our Chris Mackey and Associates’ Resources page.

Chris Mackey is a clinical psychologist and Fellow of The Australian Psychological Society with 40 years’ psychotherapy experience. He received the 2019 Australian Allied Health Impact Award. He is the author of The Positive Psychology of Synchronicity: Enhance Your Mental Health with the Power of Coincidence (See book website).