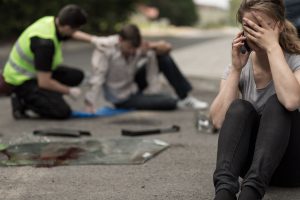 One of the harsh facts of life is that we can be exposed to a traumatic incident at any time. A recent example was a cyclist having a fatal collision with a truck in one of Geelong’s most central and busy streets. Many people witnessed the accident or its aftermath, being at a time when people were on their way to work. It’s not the kind of place you’d expect to encounter a fatal incident.

A number of people who encountered the tragic scene will likely have experienced some characteristic trauma symptoms. For them and their families, it can help to be aware of common reactions that people might have after witnessing a fatality, and to be reassured that such reactions will usually settle relatively well within four to six weeks.

Personally encountering a traumatic event, especially when it involves death or the threat of death, can greatly disrupt our sense of the world being a relatively safe place. Common reactions may include having intrusive thoughts or images about the incident, which may include flashbacks or disturbing dreams. Because such thoughts or recollections are typically distressing, we may attempt to immediately block them out of mind. However, it is usually best to at least briefly acknowledge painful intrusive thoughts, even for a few seconds, before we redirect our attention to other things. These reactions are a natural part of coming to terms with what we have experienced.

Some people will also experience an increase in anxiety symptoms, including disrupted concentration and sleep, or greater irritability. People may feel increasingly concerned about their own and their family’s safety, sometimes becoming excessively vigilant in looking for danger. These reactions often settle within a month or so, especially if you return to usual routines soon afterward and engage in regular exercise. It also helps to draw on your usual social supports, even though you may be tempted to socialize less.

The main warning signs of more complicated trauma reactions include persistent nightmares about the accident scene, lasting feelings of numbness or unreality, becoming socially isolated, increasing your use of alcohol or drugs, or ongoing domestic arguments. If these reactions persist beyond four to six weeks, it is generally worth seeking specialised help to address such reactions. This might best involve interventions to directly target trauma memories to lessen their impact.

Even with severe or chronic trauma reactions, people typically experience lasting recovery with specialised help, but it’s usually better to seek assistance sooner rather than later. The first step is usually to consult with your GP who will likely be aware of good treatment alternatives.

In the long run, we increase our resilience when we adjust to having experienced or witnessed traumatic events. We can learn that we generally come through difficult times intact, and that we’ll likely get back to feeling our usual selves after even the most stressful times. We might appreciate that the world is not a completely safe place, but is relatively so. We can have a refined sense of priorities, because traumatic experiences can force us to appreciate what is most important in life.

If you or your loved ones encounter a traumatic situation, it can help to remind yourself and others affected that the reactions described earlier are understandable given the circumstances. It helps not to be unduly alarmed, as this can compound an already distressing situation. Help is available if problems persist. In the vast majority of cases we recover well.